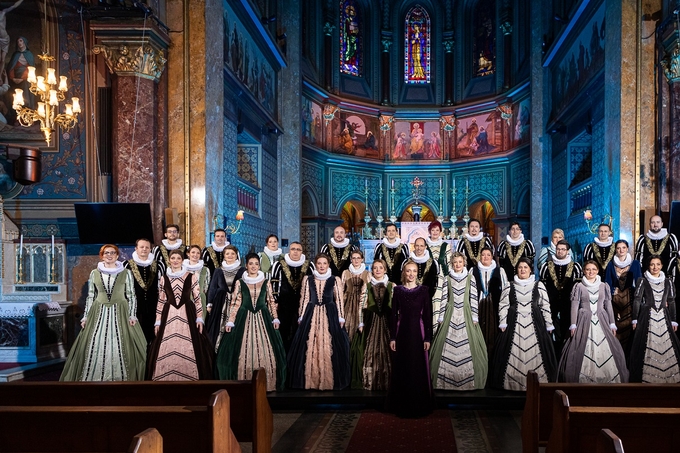 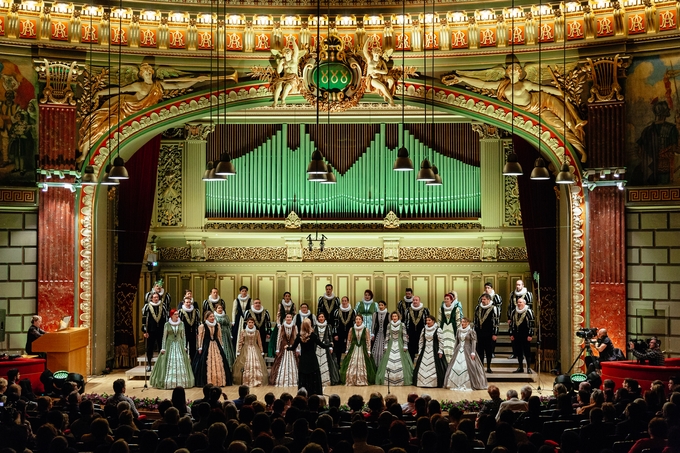 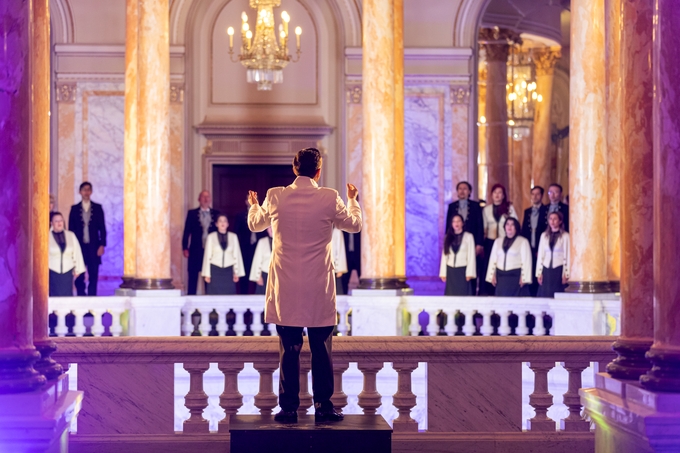 On June 9, the famous Romanian choir will be performing at Lisinski Hall the music of the European Renaissance.
The National Chamber Choir "Madrigal - Marin Constantin" symbolises the Romanian and universal musical life. Since its founding by the legendary musician and conductor Marin Constantin (1925–2011) in 1963, the Madrigal Choir performed over 4,600 acclaimed concerts worldwide, considered an authentic Romanian cultural brand.
It is one of the world standards of chamber choral music, recognised by its unique concept, defined by its specific sonority, stereophonic location on stage and impressive costumes. The Choir's repertoire is focused on the European Renaissance, Gregorian and Byzantine scores, traditional carols, and the compositions of classical or contemporary Romanian and universal creation.
Currently, the National Chamber Choir "Madrigal - Marin Constantin" is a public institution of concerts of national importance within the Romanian Ministry of Culture. The Honorary Director of the ensemble is the renowned international conductor Ion Marin, and since 2014, the institution is managed by Emil Pantelimon. The principal conductor of the Madrigal Choir is Anna Ungureanu - a disciple and follower of the Maestro Marin Constantin, and since 2016, the second conductor is Cezar Verlan.
In November 2016, the National Chamber Choir "Madrigal - Marin Constantin" was officially recognised as an Ambassador of Freedom, Hope and Peace, receiving the "Jean Nussbaum and Eleanor Roosevelt" Award at the United Nations Palace in Geneva, during the Global Summit of Religion, Peace and Security.
In 2019, in addition to the Extraordinary Christmas and Easter tours and concerts, the ensemble performed in La Cetra d'Orfeo "Ay Amor!", a project directed by the Belgian musician Michel Keustermans at the well-known "George Enescu" International Festival, and in November, the female voice parties (soprano and viola) joined the Hamburg Symphony Orchestra, conducted by Maestro Ion Marin, for the concert "Doppelfenster: Beethoven und Pergolesi".
In the complicated cultural circumstances of the last two years, the Madrigal Choir hosted the outdoor Summer Season in 2020, with five concerts, each with distinctive themes, repertoires, costumes and artistic concepts: "Hora staccato", "Madrigal sings to the children", "The Renaissance Music", "Choral Jewellery" and "Ave Maria".
Also, in December 2020 and May 2021, the Choir launched the videos of its famous Extraordinary Christmas and Easter Concerts, conducted by Anna Ungureanu and Cezar Verlan, which can be accessed for free on the newly created online platform - Madrigal App - app.madrigal.ro, as well as five six new record albums with Roton Music - three labels "Madrigal de Crăciun"/"Madrigal for Christmas" (awarded with the Golden Record), two dedicated to the Easter holidays - "Ave Maria", conductor Anna Ungureanu and "Holy Week", conductor Cezar Verlan and one with Romanian music – ”Hora Staccato”, conductor Anna Ungureanu.
Also, in November 2021, The Madrigal Choir, conducted by Anna Ungureanu held The international tour in Italy, where the ensemble participated as a special guest in the second edition of the International Choral Conducting Competition "ROMANO GANDOLFI” in Parma and on the occasion of the National Day of Romania, the Choir performed an Extraordinary Concert at St. Peter's Basilica in Bologna. The Tour was followed by the The December Christmas event of the ensamble, "On the way to Christmas", sold out and praised at the Bucharest National Opera.
From 2021, the Madrigal Choir is implementing an extensive program of international communication, offering the states of the world the national anthems performed at outstanding acoustic and visual standards.Thus, recently, the Madrigal Choir manged to record and publish no less than 25 international national anthems.
Recently, The National Chamber Choir "Madrigal - Marin Constantin" has announced the National Easter Tour - "The Holy Week" in four Romanian cities, in response to the numerous requests received from the public. At the end of April 2022, the Choir will perform an extraordinary concert at the invitation of the ”BOULEZ ENSEMBLE XLIV”, in the famous "Pierre Boulez Saal" in Berlin, Germany as a tribute to the composer Igor Stravinsky.
Since 2011, the institution has been coordinating the Cantus Mundi National Program, the most extensive social integration program through music for children in Romania, initiated by Maestro Ion Marin. The program brings together over 1,680 choirs and 60,000 children from Romania and the Romanian Diaspora.
After 59 years of uninterrupted activity, the Madrigal Choir continues its journey of cultural diplomacy, being one of the longest-lived and most appreciated European choral ensembles.
The tickets for the concert costing HRK 80, 100 and 120 are available at the Lisinski hall Box Office and online HERE.