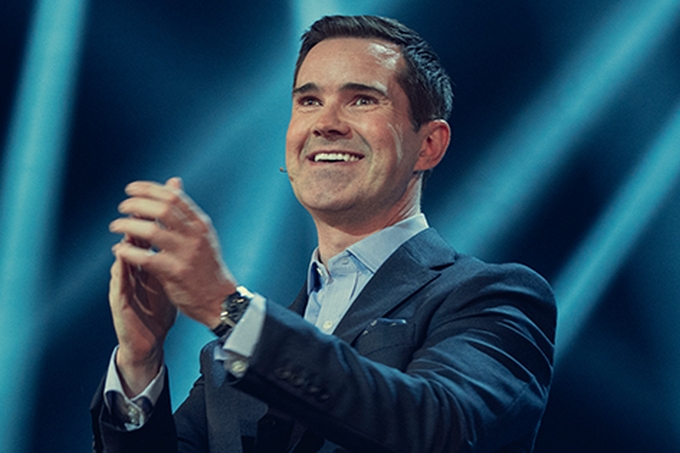 The star of Netflix specials, British comedian Jimmy Carr will be performing in Zagreb on November 15 at Lisinski Concert Hall.
Jimmy Carr, the most popular comedian on Netflix, returns to Croatia for the first time in 5 years. Even though his last stand-up special in Vatroslav Lisinski concert hall was sold-out, his popularity has grown even further since his last visit, notably due to three fantastic specials he filmed for Netflix.
Carr was also the first British comedian to have a contract with the streaming giant, mainly due to his unique brand of humor, and in part due to the popularity from having been a guest on some of the most popular and prestigious British and American television shows, such as The Tonight Show, The Late, Late show and Late Night with Conan O'Brien.
British newspaper The Guardian described him as „a comedy hero for our times“, a praise also given to him by his fans all over the world – with over 480 thousand tickets sold on his last tour, he aims to best that number before the end of 2022.
He’s well known for his brilliant, often crude humor on the edge of “good taste”, and the stand-up crowd knows him as one of the best improvisers, as his interactions with the crowd and his witty comments perfectly round up the whole experience.
Coming to Lisinski hall as a part of his “Terribly Funny 2.0” tour, he will be performing a 100% new, never published material.
The show is in English and is recommended for ages 16 or over.