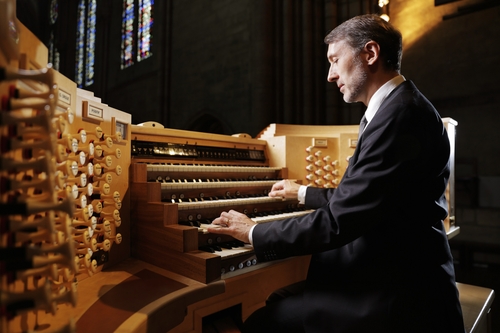 Olivier Latry, titular organist of Notre-Dame Cathedral, which was damaged in the tragic fire in April, is one of the world's greatest and most talented organists. Simple as that, as one of the numerous delighted listeners and commenters wrote on Latry's Facebook page. Proof of this are his numerous appearances in the world's renowned concert halls, among which Philharmonie de Paris, Disney Hall, San Francisco’s Davies Hall, Amsterdam’s Concertgebouw, Hamburg’s Elbphilharmonie, Philadelphia’s Verizon Hall, Leipzig's Gewandhaus, Vienna's Musikverein and Konzerthaus, Budapest's Palace of Arts, Royal Festival Hall, KKL Lucerne, Royal Albert Hall, Suntory Hall, the Mariinsky Theatre, Rotterdam’s De Doelen... He has performed with the world's leading orchestras (the Philadelphia Orchestra, the Los Angeles Philharmonic, the Boston Symphony Orchestra, The Philharmonia Orchestra, the Rotterdam Philharmonic Orchestra, the Sydney Symphony Orchestra, the RSO Wien, the Hong Kong Philharmonic Orchestra, the Toronto and Montréal Symphony Orchestras, the French National Orchestra) under renowned conductors Myung-Whun Chung, Andris Nelsons, Esa-Pekka Salonen, Stéphan Denève, Fabien Gabel, Christoph Eschenbach, Kent Nagano, Edo de Waart and Jukka-Pekka Saraste. His strong affinity for French repertoire is reflected in his recordings of Olivier Messiaen's complete organ works with Deutsche Grammophon and in an album dedicated to the works of César Franck. His latest album with Naïve, which contains pieces composed by former and present organists of Notre-Dame, bears his mark, as well. He is the organist in residence at the Dresden Philharmonic Orchestra, Organist Emeritus with the Montreal Symphony Orchestra, Professor at the Conservatoire National Supérieur de Paris... He has received numerous awards in France and outside of it and an honorary Doctor of Music degree from McGill University in Montreal.

“We must learn from the past in order to project ourselves into the future”, Latry said. His recognizable character produces top improvisation creations, which are very popular. He has particularly won audiences with his performances of works by contemporary authors. “One cannot and must not fight against the past, but on the contrary assimilate it, the better to derive inspiration from it and then find one's personal path. We shouldn’t really be talking about authenticity at all, but, more soberly, about sincerity.”

The Zagreb audience rarely has an opportunity to hear Walcker's “queen of instruments” at Lisinski Hall. This is why the appearance of such an outstanding organist as Olivier Latry is a unique opportunity to enjoy the sound of Walcker's organ and a magnificent interpretation that is not to be missed!